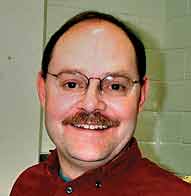 I have been involved with plant pathology research and disease control strategies since 1977 when I attended the University of Minnesota as an undergraduate in the plant pathology department. During my professional career I have lived in North Dakota, Illinois, Zambia, Nigeria, and Taiwan. I have visited over 20 countries professionally and have participated in many international and regional meetings.

The long-term goal of my program is to conceive and conduct applied and basic research in three areas of soybean pathology that will aid in efficient disease control strategies: 1) research on the biology and ecology of soybean pathogens with emphasis on their pathogenic variation, 2) the study of basic epidemiological concepts related to disease development and spread and how pathogens and the diseases they cause affect the quality and quantity of soybean yields, and 3) investigating the existence, nature and genetics of host resistance in soybean germplasm and in other Glycine species.