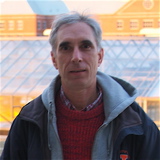 Much of my time is devoted to screening entries in the University of Illinois Crop Soybean Testing program, providing information about variety responses to SDS, Phytophthora root rot, Sclerotinia stem rot, Soybean mosaic virus, and other soybean pests for the VIPS (Variety Information Program for Soybeans) publication and website http://web.aces.uiuc.edu/VIPS/. These results provide soybean producers unbiased disease information for over 700 commercial varieties. The VIPS program also provides an opportunity to research screening methodologies, and study the frequency and levels of resistance to common soybean diseases in elite germplasm. Most of this effort is conducted in the greenhouse, but I remain involved in field evaluations and research as well. My current research interests include sudden death syndrome, Phytophthora root rot, Sclerotinia stem rot, and green stem disorder of soybean. Twenty years of experience in commercial research helped me develop a practical view toward public research. While developing commercial corn hybrids, I maintained an interest in plant pathology and evaluated the response of proprietary and competitive corn lines to foliar pathogens. Prior to that, I completed doctoral research with the Soybean Breeding and Genetics Project at Kansas State University, studying charcoal rot of soybean. Working at the National Soybean Research Laboratory has allowed me to return to soybeans and the town where I was born, Urbana, IL.