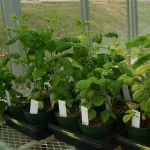 SMV test in the greenhouse. 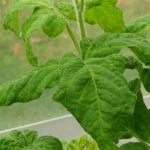 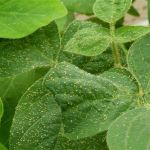 Soybean aphids are one mode of transmission of SMV.

Overview: Soybean mosaic virus (SMV), cause of soybean mosaic, occurs in all soybean-production areas of the world.

Symptoms: Symptoms vary with host genotype, virus strain, plant age at infection, and environment. Most infected cultivars are slightly stunted with fewer pods that are sometimes dwarfed and flattened, without hairs, and without seeds. Trifoliolate leaves have a mosaic of light and dark green areas that may later become raised or blistered, particularly along the main veins. Primary leaves of some cultivars may show necrotic local lesions, which merge, into veinal necrosis followed by yellowing and leaf abscission.

Seeds from infected plants may be mottled brown or black, depending on hilum color. Seeds may be smaller and germination reduced as compared to seed from noninfected plants. Mottling does not indicate that the virus is present in seeds as not all mottled seeds contain virus and not all seeds from virus-infected plants are mottled.

Causal Organisms: SMV is a flexuous rod consisting of positive-sense, single-stranded RNA. Numerous strains of the virus have been identified based upon reactions on a set of differential cultivars. In the United States, SMV has been classified into nine strains using differential reactions on eight soybean cultivars. The strains are currently known at G1 through G7, G7a, and C14. It is probable that additional strains exist, particularly in People's Republic of China and Japan.

Disease Cycle: SMV is sap and graft-transmissible. At least 32 aphid species, belonging to 15 different genera, transmit the SMV in a nonpersistent manner. Virus isolates may show some vector specificity. Infected plants resulting from transmission through seed play an important role in SMV epidemiology. Such plants are primary inoculum sources for SMV. In most cultivars, seed transmission is less than 5%, but no transmission occurs in some cultivars while others can have levels as high as 75%.

At the present time, the use of SMV-free seed and avoiding late planting of soybean are the best control measures to preclude loss induced by SMV. Serological seed indexing techniques and/or grow-out tests can be used for virus detection in seed lots. Rouging, in addition to being generally impractical in the field, may not be very effective because of the tendency for symptoms in soybean to be masked above 30°C.

Researchers: At the Laboratory for Soybean Disease Research, Houston Hobbs is conducting research on this disease.