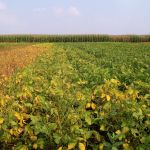 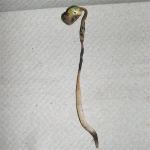 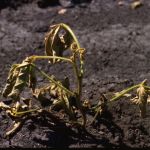 Overview: Phytophthora root and stem rot symptoms were first observed in Indiana in 1948 and Ohio in 1951. The causal agent was identified in Ohio and North Carolina in 1954. Since that time, Phytophthora rot has been reported throughout the soybean-growing regions in the United States and other areas of the world.

Symptoms: Phytophthora rot may be found in soybean at any stage of development. Early symptoms are seed rot and preemergence damping-off, which may necessitate replanting. These symptoms occur in soils flooded soon after planting and are commonly misidentified as water damage. Postemergence damping-off and seedling root and stem rot also occurs under the same conditions and reduces stands.

Causal Organisms: Phytophthora sojae, the causal fungus, produces sporangiophores that are simple and indeterminant. The fungus is homothallic and produces oospores in infected tissue.

Disease Cycle: P. sojae persists in soils as oospores either in crop residues or free in soil after residues decompose. Many oospores are formed in roots and stems of susceptible and tolerant soybean cultivars. Oospores survive for many years without a host. It is assumed that in the spring, oospores germinate whenever the temperature is suitable for forming sporangia. The sporangia accumulate until the soil is flooded at which time zoospores are released. Soils must be flooded or saturated with water for zoospores to be produced. Zoospores can swim short distances (1.0 cm or less) in saturated soil but are disseminated primarily by moving floodwater. Zoospores are attracted to seeds and roots by genistein and other isoflavanoid exudates. They encyst on the root surface and immediately germinate and penetrate the roots.

In some cultivars the hypocotyls are susceptible, but the roots may be partially resistant. This phenomenon has not been clearly defined and no specific genes have been described.

A third type of reaction is a cultivar-specific quantitative difference in disease that is a type of non-race-specific, partial resistance and has been referred to as field resistance, rate-reducing resistance, or tolerance. Some tolerant cultivars are Asgrow A3127, Conrad, Elgin, Jack, Ripley, and Zane.

Metalaxyl, an acylalanine fungicide specific for Oomycetes, is often applied to tolerant cultivars as a seed treatment (Apron) or as an in-furrow spray or granule (Ridomil). Metalaxyl is more effective on highly tolerant cultivars. In general metalaxyl applied to the soil is taken up by the roots of the plants and provides longer-lasting control than metalaxyl seed treatment.