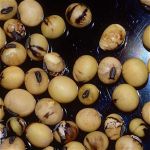 Overview: Bean pod mottle virus (BPMV) is beetle-transmitted to soybean and causes a mottling of soybean leaves. This virus was first noted on soybean in Arkansas, North Carolina, and Virginia in 1958 and has since been reported to be widespread in many of the soybean-growing areas in eastern, midwestern, and southern states.

Symptoms: Symptom development is most obvious, and yields lower, in plants infected early in the growing season. Young leaves in the upper canopy exhibit green to yellow mottling. Severe strains of the virus may cause puckering and distortion of leaves. Symptoms are masked during periods of high temperature and are not observed on plants after pod set. Plants infected with BPMV may have green stems after the pods have matured and may retain petioles after leaf blades have abscissed.

Causal Organisms: The virus has small isometric particles and a single-stranded RNA genome. The virus is strongly immunogenic and polyclonal antibodies have been used in gel diffusion tests and enzyme-linked immunosorbent assays (ELISA) to detect the virus in soybean leaves, soybean seeds, other herbaceous hosts, and in the bean leaf beetle.

Disease Cycle: Leaf-feeding beetles (Coleoptera) belonging to Cerotoma trifurcata, Colaspis brunnea, C. lata, Diabrotica balteata, D. undecimpunctata howardi, Epicauta vittata, and Epilachna varivestis are known to transmit the virus. The host range of BPMV is largely restricted to legumes and includes soybean. The virus is readily sap-transmissible and has been reported to be seed-transmitted in soybean at a frequency of 0.1%.

Management: Immunity to BPMV has not been found in soybean, but identified within the genus Glycine, and it has been suggested that interspecific crosses might be used to introduce immunity to BPMV into commercial cultivars. Four soybean germplasm lines were registered as resistant to BPMV.

Researchers: At the Laboratory for Soybean Disease Research, Dr. Houston Hobbs is conducting research on this disease.