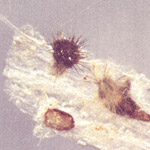 Overview: Anthracnose of soybean was first reported in Korea in 1917, and now is known to occur wherever soybeans are grown. The disease is capable of causing serious economic consequences especially in wet, warm and humid areas. It reduces stands, seed quality, and yields by 16-26% or more in the United States, 30-50% in Thailand, and 100% in some areas in Brazil and India.

Symptoms: Soybean plants can be infected at any stage of development. Symptoms typically appear during the early reproductive stage on stems, petioles and pods as irregularly shaped brown areas. Leaf symptoms include leaf rolling and necrosis of laminar veins. In the late reproductive stages, infected tissues are covered with black fruiting bodies (acervuli) that produce minute black spines (setae) that can be seen with unaided eye. Premature defoliation may occur throughout the canopy when cankers girdle the leaf petioles. These cankers often occur where the leaflets join the petioles, resulting in a shepherd’s-crook. Infected seeds may develop brown staining or small, irregular gray areas with black specks and may die during germination. Seedlings become infected from seedborne inoculum or from infested debris in the field. Infected seedling can die pre- or post-emergence and often have dark, sunken cankers extending up toward the on the epicotyl and down to the radicle.

Causal Organisms: The most common pathogen associated with soybean anthracnose is the fungus Colletotrichum truncatum. Other Colletotrichum species that can be involved include C. coccodes, C. destructivum (teleomorph Glomerella glycines), C. gloeosporioides (teleomorph G. cingulata), and C. graminicola (teleomorph G. graminicola). All have wide host ranges. All these except C. graminicola are seedborne in soybean. C. truncatum is characterized by crowded, black acervuli on infected tissues. The acervuli are oval to elongate, hemispherical to truncate conical, and erumpent with numerous black, needle-like setae 3-8 x 60-300 µm. Conidia (3-4.4 x 17-31 µm) are curved, unicellular, and hyaline. G. glycines produces submerged, short-beaked perithecia that protrude through the epidermis from the stomata. The perithecia (180-340 µm in diameter) form in groups of two or more and are short beaked, membranous, and globose. Asci (7-13.5 x 30-106 µm) are oblong to blunt clavate. Ascospores (3.7-4.7 x 19-35 µm) are smooth, hyaline, aseptate, straight to sigmoid, and mostly allantoid with round ends.

Disease Cycle: C. truncatum and G. glycines can overseason as mycelium in infected crop residue or in infected seeds. Inoculum from infected seeds and residue may cause pre- or postemergence damping-off of seedlings. Mycelium may also become established in infected seedlings without symptoms development until the plants begin to mature. Stem and pod infections occur predominately during the reproductive stages when the weather is warm and moist. Conidia of the two fungi germinate and form appressoria at temperature below 35 °C when the plant surface is wet. The conidia are short lived and sensitive to drying. Infection typically occur if rain, dew, or fog provides free moisture for periods of 12 hr or longer.

Management: Soybean cultivars may vary in their susceptibility to anthracnose, and sources of resistance have been identified in some plant introductions. High-quality seeds relatively free of pathogens should be used. Infected seeds should be treated with a recommended fungicide. Crop residues should be plowed under where soil erosion is not a concern. When economically feasible, benomyl, fentin hydroxide, or chlorothalonil sprays are helpful when conditions favoring infection occur between bloom and pod fill. Crops that are not hosts (nonlegumes) of the Colletotrichum spp. capable of infecting soybean can be used in rotation.