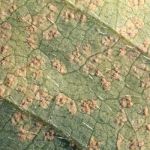 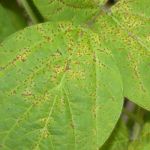 Overview: Soybean rust is found extensively in areas of the Eastern and Western Hemispheres. In the Eastern Hemisphere, it occurs from Japan to Australia and westward to India and in the People's Republic of China, Hawaii, and central and southern Africa; in the Western Hemisphere it is found generally in Latin America and regions of the Caribbean and as of 2006 it is also found occurring in North America in the South and Southeast reaching upwards to Illinois. Significant losses have been reported only in the Eastern Hemisphere: 10-40% in Thailand, 10-90% in India, 10-50% in southern China, 23-90% in Taiwan, and 40% in Japan. Nearly complete losses can occur in limited areas in most of these countries. Losses in the United States have been limited. Heavily infected plants have reduced seed weight and fewer pods and seeds.

Research: Research is being done on the management of soybean rust based on studies on host resistance and fungicide control.

Symptoms: The most common symptoms are gray green, tan to dark brown or reddish brown lesions with one to many erumpent, globose uredia, particularly on the undersides of the leaflets. Lesions tend to be angular, are restricted by leaf veins, and reach 2-5 mm in diameter. Lesions may also appear on petioles, pods, and stems. Telia (about 50-150 urn in diameter) form subepidermally among uredia and are dark brown to black at maturity. They are crustose, irregular to round, and sparse to aggregated.

During the early stages of development before the onset of sporulation, rust lesions may be confused with bacterial pustules (see Bacterial Pustule). However, the symptoms of the two diseases can be differentiated by the presence of multiple uredia in the rust lesion and by the irregular cracks that usually appear in host tissue with a bacterial pustule lesion.

The anamorphic fruiting structures (uredia) of the two species each have a cellular basal peridium terminating in paraphyses. Telia of P. meibomiae contain teliospores arranged in layers of one to four. Teliospore walls are cinnamon brown to light chestnut brown and 1.5-2.0 µm thick; walls of the uppermost spores are up to 6 µm thick apically. Urediniospores (12-24 x 16-31 µm) are ellipsoid, densely echinulate, and colorless to pale yellowish brown. They germinate at temperatures of 16-28°C.

Telia of P. pachyrhizi contain teliospores arranged in layers of one to seven. Teliospore walls are pale yellowish brown to colorless and 1 um thick or slightly thicker apically in the uppermost spores. Urediniospores (15-24 x 18-34 µm) are obovoid to broadly elliptical with walls that are 1.0 µm thick, minutely and densely echinulate, and colorless to pale yellowish brown. They germinate within 3-6 hr of incubation at 14-29°C.

Disease Cycle: Rust epidemics are most severe during long periods of leaf wetness when the mean daily temperature is less than 28°C. Urediniospore germination and penetration require free water and occur at 8-28°C. Uredia appear about 9-10 days after infection, and Urediniospores, the primary means of disease spread, are produced after 3 weeks. The role of individual hosts in the overseasoning of the pathogen is not known. Soybean is susceptible at any stage of development, but symptoms usually appear from the middle to late in the season because a prolonged wet, cool period is required for infection and sporulation. Spread of urediniospores is by windblown rain. The pathogen is not seedborne in soybean.

Management: Four dominant, independently inherited genes for resistance to P. pachyrhizi have been identified: Rpp1, Rpp2, Rpp3, and Rpp4. Other lines suspected of containing genes for resistance include PI 239871 A, PI 239987B (Glycine soja), PI 230971, PI 459024, Taita Kohsiung no. 5, and Tainung no. 4. Genes for resistance also occur among wild Glycine spp. from Australasia (see Introduction). Efforts are being made to transfer this resistance to G. max. Rate-reducing resistance has been demonstrated; however, it is difficult to evaluate because the rate of rust development is dependent on soybean plant development and maturity. Evaluating soybean lines on the basis of their ability to reduce yield losses is a promising method of developing improved cultivars that produce more stable yields in different environments.

Certain fungicides, such as mancozeb and triadimefon, can reduce rust damage but may not be cost effective when frequent applications are needed.

Researchers: At the Laboratory for Soybean Disease Research, Glen Hartman, Monte Miles and Chandra Paul are currently conducting research on this disease.