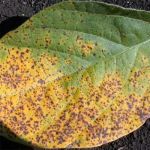 Close up of leaf with Septoria Brown Spot

Overview: Brown spot, also known as Septoria leaf spot, was reported in the United States in 1922 and has been reported in most soybean growing regions worldwide.

Causal Organisms: Septoria glycines (teleomorph: Mycosphaerella uspenskajae) causes brown spot. It forms brown pycnidia in dead tissues of old lesions that are embedded in the substrate and open to the surface by a large pore (ostiole). Pycnidia formed in leaf tissues are globose to conical-globose, whereas those formed in stems are flattened considerably because of their position in the tissue.

Disease Cycle: Brown spot causes premature defoliation. Yield losses of up to 34% have been reported. The disease is most severe when soybean is grown continuously in the same field. Leaf symptoms developed on 29 legumes and Abutilon theophrasti when inoculated either in the field or greenhouse. Conidia and mycelium overseason on infected leaf and stem debris and in infected seeds are primary inocula. Lesions that develop on infected cotyledons and unifoliolate leaves are sources of secondary inoculum.

Infection and disease development is favored by warm, moist weather, which promotes sporulation of the pathogen in primary lesions. Disease severity increases with increasing leaf wetness periods from 6 to 36 hours. The fungus enters through stomata and grows intercellularly, killing cells next to the hyphae. It penetrates pods through stomata or by growing through placental and funicular tissue and later invades the seed coat.

Management: Cultivars vary in their susceptibility, but there are no known resistance sources. Rotate soybean with a nonlegume crops for at least 1 year.