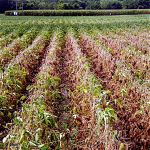 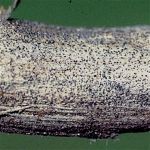 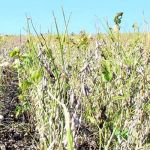 Symptoms: Infected seedlings may show a reddish brown discoloration at the emerging portion of the hypocotyl. If infection occurs through the roots, discoloration is evident at the soil line and above. The discolored area turns dark brown to black and infected seedlings may die, particularly under hot, dry conditions. The pathogen produces an exotoxin, phaseolinone, which is responsible for germination inhibition and seedling wilt. After mid-season, the charcoal rot phase appears during the reproductive stages of soybean development. Infected plants at first produce leaflets that are smaller than normal and show a subtle loss of vigor. In a more advanced stage, leaflets first yellow, wilt and then brown, but remain attached to the petiole. After flowering, a light gray or silvery discoloration of the epidermal and subepidermal tissues develops in the taproot and the lower part of the stem. Microsclerotia form in the vascular elements and may block water flow. The fungus causes a reddish brown discoloration in the vascular tissues of the taproot and progresses up into the stem, discoloring the vascular and pith tissues. When the taproot is split, black streaks in the woody portion of the crown are revealed.

Causal Organisms: Macrophomina phaseolina has a wide host range and geographic distribution, infecting more than 500 crop and weed species. The fungus is highly variable, with isolates differing in microsclerotial size and the ability to produce pycnidia. Microsclerotial morphology is a key taxonomic characteristic in the identification of this fungus. Cultural and morphological characteristics can vary as a result of continuous sub-culturing. The optimal temperature for growth in culture ranges from 28° to 35°C.

Disease Cycle: In dry soils, microsclerotia survive in soil or embedded in host residue for 2 or more years. In wet soils, microsclerotia cannot survive more than 7 to 8 weeks, and mycelia no more than 7 days. Microsclerotia must germinate either on the surface of, or in close proximity to, roots for infection to occur. Pathogen growth and infection of soybean can occur at emergence and at the cotyledonary stage with 80 to 100% of seedlings infected 2 to 3 weeks after planting.

Management: Strong resistance to charcoal rot does not exist among soybean cultivars. Cultivars with lower susceptibility to the disease may be available from some seed producers. Early maturing cultivars that do not have late reproductive growth stages that might coincide with periods of drought stress and high temperatures may help avoid severe damage to the disease during years with hot, dry summer weather conditions.

Researchers: At the Laboratory for Soybean Disease Research, Curt Hill is conducting research on this disease.