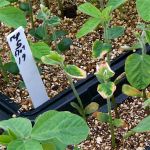 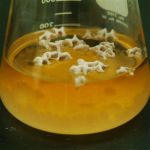 Overview: Sudden death syndrome (SDS) is a mid- to late-season disease with distinctive foliar symptoms that more commonly occur in high yield environments. SDS was first observed in Arkansas in 1971, but throughout the 80s and 90s it has been reported in most states throughout the U.S. The disease has also been reported in Argentina and Brazil. Yield losses from SDS, range from slight to nearly 100% and is dependent on disease onset and severity. Infected plants often have increased flower and pod abortion and reduced seed size.

Symptoms: Symptoms on leaves usually are observed in the early reproductive growth stages. Symptoms first appear on leaves as scattered, interveinal chlorotic spots which may become necrotic or enlarge and coalesce into chlorotic streaks that become necrotic leaving only the midvein and major lateral veins green. Severely affected leaflets detach from the petioles, which remain attached to the stem. Root mass of SDS-affected plants is reduced and discolored, and precede foliar symptoms. Severely diseased plants are easily pulled from the ground. Longitudinal sections of taproots and lower stems of diseased plants have discolored gray to brown xylem vessels that extend up the stem with the pith remaining white.

Causal Organisms: SDS is caused by the soilborne fungus, Fusarium virguliforme (Akoi, O’Donnell, Homma & Lattanzi), formerly named F. solani (Mart.) Sacc. f.sp. glycines. In culture, the fungus is slow growing, appressed producing abundant macroconidia in a slimy pionnotal blue to blue-green or blue-purple mass. Macroconidia are 3 to 5 septate, 34-66 µm by 3.8-5.0 µm and are produced on short, simple to branched conidiophores on monophialides. Chlamydospores are globose to subglobose and form terminally or intercalary in hyphae and may form in or adjacent to macroconidia. Research indicates that the distinctive foliar symptoms may be the result of one or more toxins produced by the fungus and translocated to the foliage.

Disease Cycle: SDS is favored by high-yield environments and is especially prevalent during cool, wet growing seasons. SDS is usually most severe in saturated soils such as in low spots or in areas prone to puddling, and in irrigated as opposed to nonirrigated fields. Cropping sequences appear to have little impact on SDS, since severe outbreaks have occurred after cotton, maize, rice, sorghum, and soybean. Moderate to high populations of the soybean cyst nematode usually, but not always, are associated with SDS and may increase the severity of SDS, especially in cultivars that are susceptible to the race of the nematode that is present. Other factors that may be associated with increased SDS are high soil fertility and soil compaction.