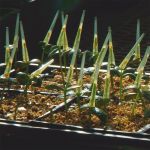 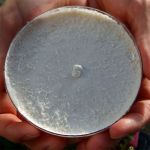 Symptoms: Symptoms of northern and southern stem canker include leaves and stems. The first symptoms of both stem cankers occur during the early reproductive stages as small, reddish brown lesions, usually near a lower leaf node. As the season progresses, the lesions expand longitudinally to form cankers. Cankers are slightly sunken and initially reddish brown.

In northern stem canker, the cankers become dark brown with age, are 2 to 10 cm long, and usually girdle the stem causing wilting and plant death. The leaves remain attached after plant death. In some cases, a tip dieback may occur.

In southern stem canker, the stem lesions become long, but rarely girdle the stem; leaf symptoms develop at this stage, with characteristic interveinal chlorosis and necrosis, but no wilting. Foliar symptoms and plant death are caused, in part, by a phytotoxin. Disease severity varies from year to year even within the same location planted with the same susceptible cultivar. Cool, moist conditions during the early vegetative stages greatly enhance disease development.

D. phaseolorum var. caulivora produces a white colony on potato-dextrose agar with interspersed cottony tufts of mycelium. Perithecia form in irregular to strongly valsoid clusters in small poorly developed stromata. D. phaseolorum var. meridionalis produces a lanose colony on potato-dextrose agar that is white-buff in color when young becoming light to dark brown with age. Some isolates produce large stromata in which perithecia form while other isolates do not form stromata or perithecia.

Disease Cycle: Severe damage by both diseases depends on early infection associated with extended periods of rainy, wet weather. Infections leading to cankers occur during early vegetative growth, but symptoms appear much later during reproductive growth. The fungi overseason in debris and the diseases are favored by conservation tillage practices.

Management: Plant resistant or moderately resistant cultivars. Four genes for resistance have been described and designated Rdc1 to Rdc4. These genes are all at different loci, but research to determine if they have additive effects has not been done.

Planting should be delayed if canker had been a prblem in a field. Conservation tillage practices in problem fields should be avoided. A filar fungicide can be applied during vegetative and reproductive growth stages, although results of effectiveness have been inconsistent.

Researchers: At the Lab for Soybean Disease Research, Andrea Pabon is conducting research on this disease.