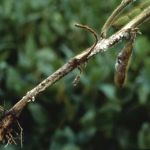 Symptoms: Wilting and eventual death of upper leaves, the first canopy-level symptoms of Sclerotinia stem rot, generally develop at growth stages R2 and R3. Leaves become grayish-green as necrosis begins, and eventually turn brown and frequently remain attached to the stems. Foliar symptoms of Sclerotinia stem rot could be mistaken for late-season symptoms of brown stem rot, Fusarium wilt, Phytophthora root rot, and stem canker. Foliar symptoms result from stem lesions that have developed 7 to 14 days before foliar symptoms are observed. Sites of infection originate at stem nodes and usually develop 10 to 50 cm above the soil line. Blossoms are a primary site of infection, although infection of tissues other than nodes, such as leaves, petioles, and internodes, can occur when plants come in contact with diseased adjacent plants.

The pathogen causes lesions that completely encircle the stem and disrupt the transport of water, mineral nutrients and photosynthates to developing pods. Pod development and pod fill above stem lesions is reduced. Stem infections rarely are observed at the soil line, although infection can occur at the lower stem nodes. Initially, water-soaked lesions develop at nodes, change from tan to white and spread acropetally and basipetally from nodes. Side branches and pods also may be infected. Cottony mycelial growth on all diseased plant parts is a characteristic sign of the pathogen.

By crop maturity, stem tissues are white and tissues have a shredded appearance if disturbed. A reddish discoloration is interspersed with diseased stem tissues and at the border of lesions. At harvest, poor pod development, a white or bleached appearance of stems, and an abundance of sclerotia characterize diseased plants. Diseased pods are outwardly white in appearance, mycelium and sclerotia are readily observed inside, and infected seed range from white and moldy to symptomless. Seed infection is generally very low.

Sclerotia are returned to the soil at harvest or as contaminates associated with seed at planting. Large, black, round to irregularly-shaped sclerotia of varying size form on stems, which are partially covered with dense white mycelium and in the stem pith. Sclerotia are formed in the stem pith and are conspicuous when the stem is opened. Seeds may become infected within diseased pods. If infected early, seeds are flattened and shriveled and sometimes replaced by black sclerotia.

One hazard associated with this disease is the contamination of seed with sclerotia during harvest. A small center of infection within a field may contaminate a large volume of seeds. At a foreign port of entry, even a few sclerotia in a shipment intended for human consumption are grounds for rejection. Further, sclerotia can germinate if free water is present, resulting in seed decay problems in storage.

Causal Organisms: The causal fungus, Sclerotinia sclerotiorum, produces hard, black, irregularly shaped sclerotia (2 to 22 mm in diameter). These sclerotia are larger than those of Macrophomina phaseolina, the charcoal rot fungus, and are easily distinguished from the smaller, round, reddish to tan brown sclerotia of Sclerotium rolfsii. Soybean also is susceptible to S. minor which may occur with S. sclerotiorum in the eastern United States.

A sclerotium may produce one to many cup-shaped apothecia, borne on slender stipes. The apothecia are 0.5 to 2.0 mm or more in diameter, funnel-shaped to discoid, and light tan to brown. The hymenium is composed of closely packed eight-spored asci, interspersed with slender, simple, hyaline paraphyses. The asci are narrow, 81-252 by 4-22 µm, and cylindrical to clavate.

S. sclerotiorum grows well on potato-dextrose agar from 1° to 31°C (optimum 24°C). The fungus is highly variable in culture, producing white to chocolate brown aerial mycelium and black sclerotia, which vary in size and shape. Spherical microconidia are formed in culture but rarely germinate in water or on nutrient agar. Apothecia and ascospores develop in alternating light and darkness at 12° to 15°C, provided the sclerotia are incubated in a water-saturated medium. Apothecia are produced between 18° and 25°C when moisture levels are at half or full field capacity.

The causal fungus has a wide host range, which includes numerous dicotyledonous plants. Many broad-leaf weeds are hosts and contribute to inoculum replenishment in fields planted to a nonhost.

Disease Cycle: Sclerotia of S. sclerotiorum survive in the soil for long periods. They are highly resistant to dry heat up to 70°C and to prolonged freezing and thawing. Those within 5.0 cm of the soil surface germinate in the field by producing apothecia. Prolonged periods of low soil temperatures, 5ò to 15òC, and soil matric potentials >-5 bars for 10 to 14 days are most favorable for apothecial development. Apothecia usually appear after the crop canopy has at least partially closed to shade the soil surface. Ascospores are forcibly ejected from asci and are windborne to nearby stems, branches, flowers and pods from as far as 50 m from the source. Blossoms are colonized and serve as a nutrient base for infection of stems. Infection of leaves, petioles, and internodes can occur through contact with adjacent diseased plants or through wounds.

Direct information is limited on the optimal environmental conditions that favor infection of soybeans by S. sclerotiorum. Most observers suggest that Sclerotinia stem rot is most likely to develop when crop flowering coincides with extended, below average air temperature and moist weather. Canopy temperatures less than 28°C and plant surface wetness for 12 to 16 hours recurring on a daily basis or continuous surface wetness for 42 to 72 hours are environmental conditions needed for disease development. These conditions are more common in the north central regions of the United States when many soybean fields begin to flower. In contrast, warmer, drier conditions tend to prevail in more southern areas in the United States, which may account for the lack of this disease in the south even though the fungus is widely distributed. The disease has been observed during periods of low rainfall when the crop was planted with row spacings of less than 38 cm. The occurrence of Sclerotinia stem rot is favored by the inclusion of another host crop in rotation with soybean. Broad-leaf weeds may serve as hosts and thereby as a source of inoculum. Seed lots contaminated with sclerotia are the most common means of introducing the pathogen into previously uninfested fields.

Since infection occurs at flowering, it follows that significant delays in planting date might influence infection and disease development. Seed transmission, although often < 1%, can be a major source of inoculum into fields that do not have the disease. Early-planted soybean generally grows taller and has more dense canopies than later planted ones. Thus, planting soybean early may encourage the development of the disease due to more favorable conditions. Early maturing cultivars tend to escape infection because of their usually short stature and early flowering. In contrast, late maturity cultivars are believed to have more disease because of lush vegetative growth and later flowering.

The number of viable sclerotia decline in the absence of host crops and decline faster if soil is not tilled compared to tilled. Avoid planting soybean directly after common bean, sunflower, and other susceptible crops. Avoid planting highly susceptible cultivars if row spacing is less than 76 cm in fields with a history of Sclerotinia stem rot. Avoid excessive irrigation until flowering has ceased. Use good weed control practices. Plant seeds free of sclerotia and fungicide treat seeds if seedborne infection is suspected. Use benzothiadizole fungicides to help reduce disease.