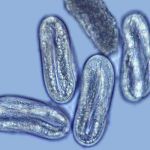 Overview: The soybean cyst nematode is known to occur in most soybean producing counties in the world and in 27 states in the United States.

Symptoms: Aboveground symptoms of infection by Heterodera glycines may include slight to severe stunting and chlorosis that often can be observed from the edge of a field, but symptoms typically are or not apparent even when a 15 to 20% crop loss occurs. The sudden appearance of symptoms actually reflects a long-term problem that has affected yield for several cropping seasons.

Causal Organisms: Young females of Heterodera glycines are white or yellow, and turn brown with age. The young female is the only life stage that is easily visible without magnification.

Disease Cycle: The eggs contain early-stage embryos, which develop quickly into first-stage juveniles that molt once within the egg into 450 µm-long second-stage juveniles (J2). The J2 either remain dormant or emerge (hatch) from the egg. The J2 penetrate roots behind the root tip and usually migrate to the vascular tissue, although they occasionally remain in the cortex. They then induce the formation of a feeding site that consists of large, distinctive, metabolically active cells called syncytia. When feeding begins, the nematodes enlarge, become sedentary and undergo three more molts before they mature into adults.

The female produces an external gelatinous matrix, into which 50 to 200 eggs may be deposited. The remaining 50 to 200 eggs produced by the female are retained within her body, and can remain viable for 12 years or more.

Management: Management begins with confirming the presence of H. glycines in the field. Because young females may be visible on the roots for only a short segment of the growing season, confirmation based on soil samples is recommended.

Sources of resistance include a large number of cultivars, breeding lines, and other germplasm. The major sources of resistance that have been used in resistant cultivar development include: Peking and the plant introductions 88788, 209332, and 437654.

Researchers: At the Lab for Soybean Disease Research, Andrea Pabon is conducting research on this disease.