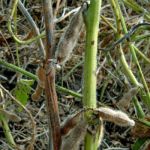 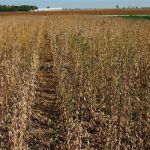 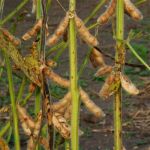 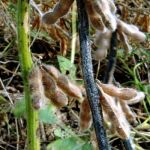 Overview: Green stem is a disorder of soybean that causes the stems of the plants to remain immature and moist after pods and seeds have fully ripened, while the normal condition is for the stems to mature and dry down along with the pods and the seeds. Although the disorder has not been shown to affect soybean yields, it significantly increases difficulty in harvesting because green stem affected plants are much harder to cut. Green stem was first reported in Kansas in 1974 and is now widely distributed throughout all soybean-growing regions. Initially, Bean pod mottle virus (BPMV) was thought to be the cause of the disorder, however, recent work indicated that the disorder is independent of BPMV infection. Because the cause of the disorder is unknown, it is referred to as a disorder rather than a disease. Green stem disorder is currently the most common type of delayed maturity found in Illinois and Wisconsin and distinguishable from other types of delayed maturity by normal ripening of pods and seeds. There are consistent differences among soybean cultivars for sensitivity to the disorder.

Researchers: At the Laboratory for Soybean Disease Research, Curt Hill and Houston Hobbs are working on projects related to greenstem disorder.